For all armies in Triumph! games there has to be a camp present on the battlefield. The camp serves for no purpose other than being a possible objective for your opponent. You have to protect your camp to prevent it from being sacked. Taking your opponent's camp gives you half the points needed for winning the game.
In my Triumph! games camps are seldom sacked, and when it happens, it is usually done by light cavalry swiftly moving around the enemie's flank and taking the camp before the owner can react to this action. To better protect your camp you may choose one of your fighting units as a garrison, but then it has to remain there and will not participate in the field battle (choices, choices ..).
Now the year is 235 AD and an arabo-aramean army from the city of Hatra is fighting arab nomads on a flat piece of land at the seashore. The Hatra player has deliberately placed his camp at the extreme left of his battleline (using a Battle Card), thus gaining space in the centre for the development of his formation:
I was playing the nomads and had planned to quickly overwhelm the weak units on Hatra's right flank. As a diversion I also advanced the light foot on my right: 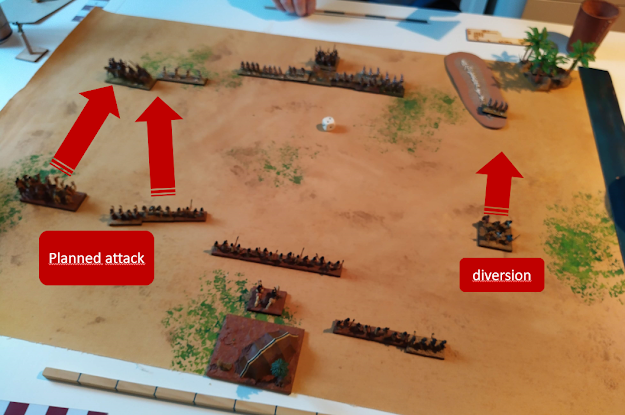 Of course the Hatra player did not fall for my ruse and reinforced both his flanks, committing his general to his threatened left. So there was no weak flank for me to overwhelm anymore: 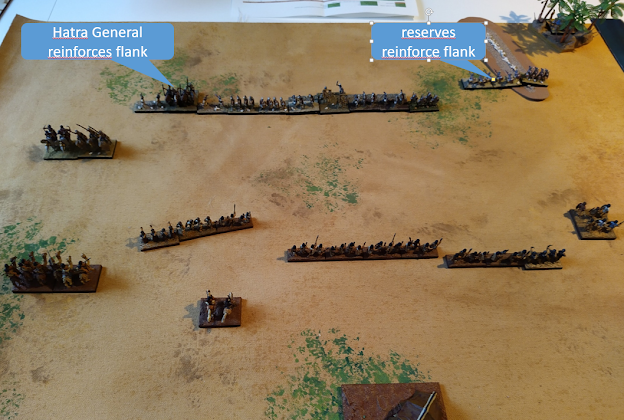 The situation went from bad to worse when Hatra turned the table on me and attacked on his former weak flank, with his Cataphract general spearheading the attack! This was not looking good for my nomads as they do not have any troops to really hold their ground against a cataphract - worse: a cataphract general! - attack: 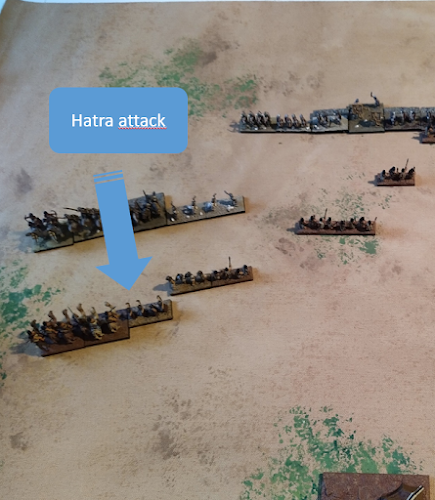 In the midst of this grim looking phase my wargaming moment was approaching:
I had noticed the Hatra general being located at the far right of his battleline. If your general is far from the troops he wants to order, the Triumph! rules make you spend double the number of initiative points.
So in the present situation the Hatra general had little control over his far left flank - including the Hatra camp. I thus decided to attack there, leaving the troops on my left flank to defend themselves: 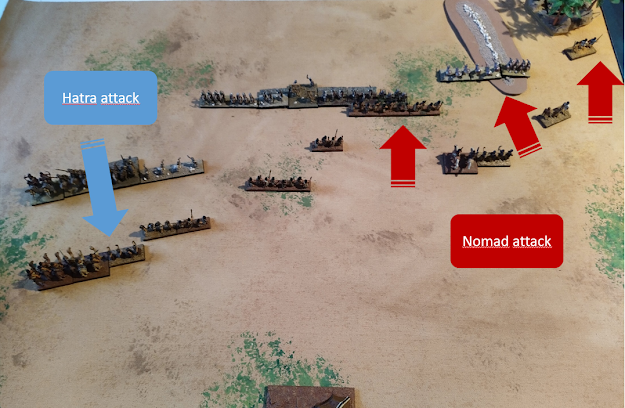 My left flank fought bravely, but in time my troops were eliminated one by one, while my attack on the right was not progressing fast enough. The battlescore tilted more and more in favour of Hatra,
when …
one of my light foot units reached the Hatra camp...
was thrown back...
attacked again...
AND SACKED THE CAMP!
The successful attack on the Hatra camp decided a very exciting and tense game. Hatra scored 13 points (of 16 necessary to win the game). It was a race on both flanks of the battlefield - with a humble light foot unit winning the day! A great wargaming moment!
Eingestellt von Maerk um 12:12