To cheer her uncle up, Mireille - favourite niece of Marshal Masséna - decides to treat him with a surprising visit on the occasion of his 53rd birthday which he will celebrate on 6th May 1811. With her distinctive tenacity - which is a typical characteristic of the Masséna family - she manages to get an small military escort for her voyage to the far west of Spain.

The ruthless behaviour of the french soldiers towards the spanish civilians has caused numerous small groups of spanish people leaving their homes, hiding in the forests and hills and from there attacking french troops and facilities by small and isolated actions - the "guerilla" (the small war) has been born! Unfortunately Mireille Masséna's escort runs into such a group of guerilleros who make short work of the french soldiers. Outraged Mireille complains about this treatment and threatens El Capitàn the leader of the group with the revenge of her uncle, the Marshal Masséna! El Capitàn being a clever man locks Mireille up in a remote farm and writes a letter to Masséna, demanding a ransom of 10'000 Reales in gold.

Arthur Wellesley, commander-in-Chief of the british-portuguese forces, is listening to the weekly report of  Major Michael Hogan, his chief spy - or "head of intelligence network", as Hogan likes to put it. There is news of a so far unknown Guerilla group having captured a highborn french lady and trying to negotiate her ransom with the french high command. Wellesley's anger at this information makes his cheeks turn pale: These "allied" Spaniards have taken a valuable french lady in their custody, but do not deem it necessary to inform the britisch commander, let alone consulting him or coordinating their action with him!

"Where is captain Sharpe?", Wellesley wants to know. "He is to report to me immediately!". A little later Major Hogan and Richard Sharpe, captain of the South Essex Regiment's light company are standing in front of their Commander-in-Chief. "Sharpe, you will track down this french person and bring her to me!".

Thekidnapping of Mireille Masséna also makes the headquarters of the french army of Portugal bustle with activity. While the Marshal's Adjutant ostensibly negotiates with El Capitàn, there is a special force preparing to rescue the niece of Marshal Masséna, Duke of Rivoli and Prince of Essling: First Lieutenant Bertrand and his cuirassiers are used to handling covert actions for the Marshal, as is René Lucas, captain of grenadiers. They now know the whereabouts of mademoiselle Masséna and they have the order to "rescue and return" her to the headquarters. A company of line infantry is at their disposal for supporting actions.

This is when the actual game of Sharp Practice Begins

The game is based on scenario number six of the Sharp Practice rulebook, called "Rescue Mission": 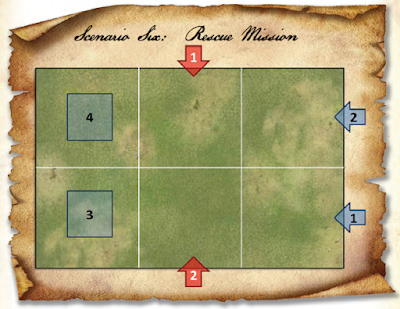 In this scenario blue - the French - are trying to rescue a person which is held captive by red in building no 3 or 4. There is one group of red troops - the spanish Guerillas - guarding the imprisoned person. Blue has two deployment points available: One is at blue 1 or 2, the other one near the building with the person held captive. The main body of red troops will arrive at red deployment point 1 or 2.

The french player has one group of grenadiers, two groups of line infantry and one group of cuirassiers at his disposal: 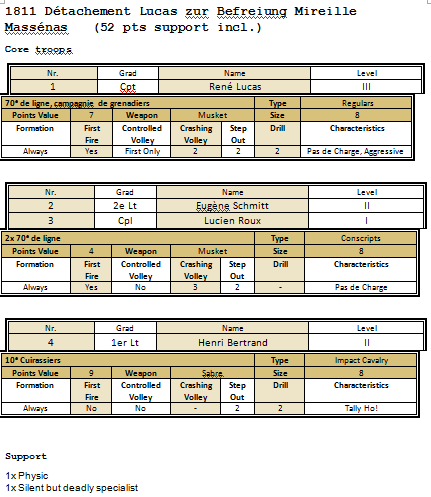 The spanish/british player fights with two groups of 95th rifles and one group of spanish guerilla skirmishers: 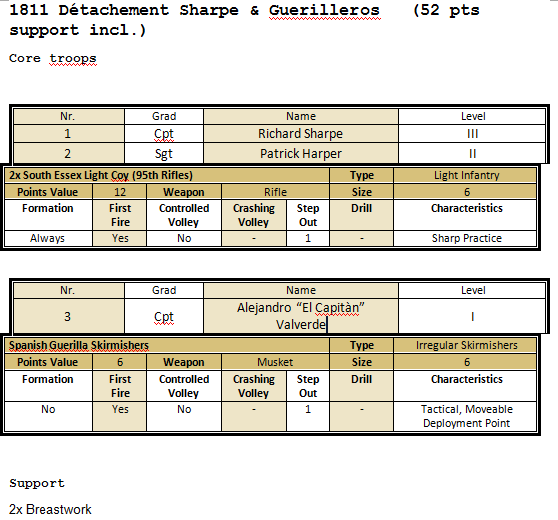 Now El Capitàn has been cheated by Marshal Masséna. The french commander never intended to ransom Mireille in gold coin. Instead he sent his special forces to rescue his niece. This is why the unsuspecting spanish leader is totally suprised by the arrival of french cuirassiers and grenadiers:


Immediately Lt Bertrand orders his heavy cavalry troop to attack the stunned spaniards and within a few moments the guerilleros are killed or fleeing. In the fight Bertrand got a blow to his temple wich made him pass out for some minutes; luckily he is recovering fast.


Richard Sharpe has learned the whereabouts of Mireille Masséna from Major Hogan and he and his men have set forth  at the double. But now as there is battle noise coming from the direction of the farm, they will certainly arrive too late? The rescue of the precious captive seems to be in full action! Sharpe leads his men on the small hill overlooking the farm and from there opens fire on the french grenadiers.


Unperturbed by the british fire the grenadiers set about getting Marshal Massén's niece out of her prison. With bayonets and musket butts they hack at the bolted door of the small cabin. [throw two dice each time the grenadiers are at work and total up. As soon as the total reaches or exceeds 14, the door has been opened]


Sharpe's men continue shooting at the grenadiers while Sgt Harper's troop is approaching the farm. Also the french support troops are on their way:


The spanish cabin's door can no longer resist. Mademoiselle Masséna may now leave her prison and betakes herself into the care of Captain Lucas and his grenadiers!


The first part of Mireille's rescue is accomplished, but now the noble lady has to be escorted back to the french army headquarters. No lingering for the grenadiers!
﻿


With a vengeance Sharpe tries to stop the grenadiers: Due to the marksmanship of his men the grenadiers are heavily decimated while there is no danger for Mademoiselle Masséna getting hit. In the meantime the troop of Sgt Harper has arrived on the hill and they too are firing at the grenadiers! Will they survive this ordeal?
The grenadiers can no longer bear up against the british fire: Casualties and shock accumulated make them run as fast as possible from the threat! Mireille gathers her skirts and runs with the battered men around her. Soon they meet Lt Eugène Schmitt's group of line infantry who has just arrived on the scene.

Lt Schmitt takes the noble lady in his care because the grenadiers are in no state to look after her even though Captain Lucas would have loved to personally hand her over to the Marshal.. Schmitt's group of line infantry and their precious asset immediately set out for the french Headquarters.


Now the Brits see their opportunities going down the drain: The Lady Masséna is vanishing from the scene while Cpl Roux' group of line infantry starts firing at Sgt Harper's group of rifles.

Cpl Roux has another ace up his sleeve: He has "La aguja" - a spanish girl in french service - with him. She has a reputation of being able to dispose of people swiftly and quietly. Roux calls her at his side and points out the british leader on the hill: Knocking off this man would certainly silence his group and their deadly rifles. Unmoved la aguja takes note of this task and sets out towards the british rifle group.
Being an experienced killer she sneaks up to the Brits and shoots Sgt Harper at point-blank range.


Now the die is almost cast: Mireille Masséna on her way to the headquarters has almost reached safe ground, the British have only one leader left and their target is far away.

So Mademoiselle Masséna has successfully been rescued from captivity. The french leaders will certainly gain a reward, be it money or promotion, while the spanish-british coalition has missed an opportunity to get Marshal Masséna in their grip by holding his niece captive.


end of the game﻿

The battlefield at the end of the game:

In the course of the game the moral of both sides significantly dropped due to the numerous casualties: The Brits started with a moral level of 11 and ended at 5. The French started at 10 and also ended the game at a moral level of 5. So both sides have been on the verge of loosing command flags due to their low morale (in Sharp Practice 2 command flags are loosely speaking used to enhance the skills of troops) and seeing cut down their options. Additionally the French almost took the british deployment point which would have lowered the morale of the British even more. All in all the French have won a well-earned victory!

Despite the small number of troops on the battlefield we had an exciting game. I played the spanish-british side and looking back my handling of the spanish guerilleros at the outset of the game was very poor. Later in the game I should have attacked the french group escorting Mireille in close combat instead of only shooting at them.
And again I forgot to add +1 to hit for light infantry groups - it would have enhanced the clout of my british riflemen. But as we all know: "after the game is before the game". I am looking Forward for a rematch!