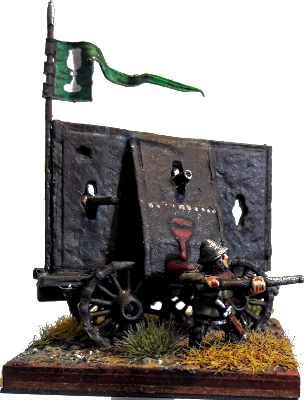 So this is the Hussite army list for the Triumph! rules:
You will notice that you have to field at least three war wagons with the Hussites but it could be up to six of them! I decided to have four war wagons:


Museum Miniatures have very nice war wagons in their Hussite German range. Unfortunately, even without the draught animals the wagons don't fit on a 40x40mm base. To make them fit, I made two cuts through the centre of each wagon with a distance of 5mm using a metal saw. Then I put the two parts together again with pin and glue. The wagons are still on the large side, but now I can put the war wagon bases side by side without the models touching each other.


There are very little mounted stands in the Hussite army list, and they are all optional. Nevertheless, the knights stand may be designated as the army's general:


The Hussite army is rather foot heavy but it lets you choose between 'expensive' elite foot and the lower priced heavy foot. I wanted the two troop types to be distinguishable on the playing field, and chose fully armoured foot knights for the elite foot and non-armoured peasantry for the heavy foot stands:

To make this army even more of a challenge, in addition to the war wagons you may choose a artillery stand, which needs two PIPs to move as the war wagons do!


The Hussite army is named after Johannes (Jan) Hus, a bohemian theologian and reformer of the early 15th century, burnt at the stake during the council of Constance in 1415. The religious background of the Hussites made me do a sermon scene for the army's camp:


The small tree on the camp is a self made model. Under the kind guidance of my dear gaming buddy Korbi, I have recently learned how to make these wonderful trees from whiteweed.