Persia – whose core area roughly corresponds to modern Iran – has a lot to offer for us wargamers intrigued by history: As early as 900 BC the Medes have founded the first Persian realm by conquering large areas of the Assyrian kingdom and finally destroying it. The Achaemenids
From about 550 BC the Achaemenid dynasty was leading the Persian realm as kings (in Persian: Shah). By conquering Babylonia and Egypt they built the first greater empire known in history.

At the time of 500 BC the Greeks in Ionia (Asia Minor) revolted against the Persian rule and thus started the 50 year period of the so called Graeco-Persian Wars. About 30 greek city states lead by Athens and Sparta finally succeeded to gain or maintain independence from Persia. Important and known events of this period are the  ground battles of Marathon and Plataiai and the naval battle of Salamis, as well as the battle at Thermopylae, which inspired the graphic novel and film “300”. 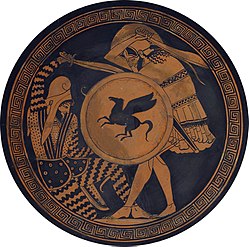 In 331 BC the Macedonian king Alexander invades Persia with a graeco-macedonian army and repeatedly defeats the Persian Great-king Dareios III. Alexander subsequently conquers the whole empire of Persia.
After the death of Alexander in 323 BC his realm disintegrates. Persia is then ruled by Seleukos I Nikator, a former general and companion of Alexander. Seleukos is founding the house of the Seleucids which is to rule Persia for the 100 years to come. 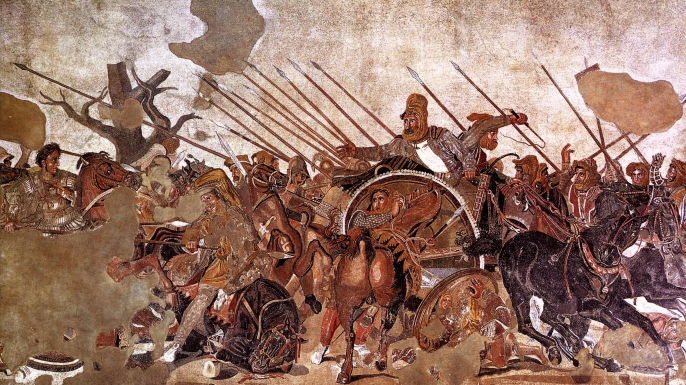 The Parthians
From 250 BC to 140 BC the Parthians – a horse people originating from the Caspian Sea – are conquering the Seleucid realm east of the river Euphrat bit by bit and are setting up their own rule in Persia. About 50 BC the Roman empire takes possession of the eastern coast of the Mediterranean Sea and ventures further east, thus starting a conflict between the Roman and the Persian empire which is to last for centuries. The rivals encounter both triumph and defeat while fighting for control of the regions of Armenia, Transcaucasia and Mesopotamia. 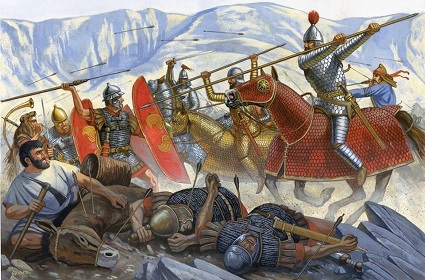 The rule of the Sassanids
During a period of weakness of the Parthian rule Ardashir – descendant of Sasan, former governor of the province of Persis and eponym of the later Sassanid dynasty – takes control of Persis against his Parthian superiors. Over the course of the following years Ardashir conquers province after province and in the year 224 AD he defeats the Parthian king Artabanos V in the battle of Hormozdgan and puts an end to the Parthian rule of Persia.

The Roman historian Lucius Cassius Dio describes the rule of Ardashir: “He prides himself of winning back all the domains who ever had been under Persian rule – going as far as to the Aegean Sea. He declares it his rightful legacy handed down from his forefathers.” All the Sassanid leaders will stick to this ambitious policy for the full 400 years period of their rule.

To the northeast the Sassanids have to defend against horse people like the Hephtalites from central Asia, to the west they fight the Romano-Byzantine empire. In both theatres the Sassanids are seeing both glorious victories – e.g. by capturing or killing the roman emperors Valerian and Julian – and crushing defeats e.g. with the death of king Peroz I in the battle of Herat in 484 AD.

At the outset of the 7th century AD the Sassanids overrun the Byzantine strongholds in Mesopotamia, conquer Armenia, invade Anatolia and later occupy Egypt. These huge losses of territory are a life-threatening blow against the Byzantine empire. Emperor Herakleios thus starts a counter offensive in 622 AD. With the help of Khazar mercenaries he expulses the Sassanids from Anatolia and finally invades into Persian core-areas.

This war of conquest and counter-conquest has weakened both the Byzantine and the Persian empire and it is a new third party – the muslim arabs - which benefits from their weakness. In the following 30 years they defeat both armies in several battles, conquer Syria and invade Persia. In the year 651 AD Yazdagird III the last Sassanid ruler dies and Persia becomes part of the muslim Rashidun Caliphate.

The DBA army II/69 Sassanid Persian
In DBA the Sassanids are a very attractive army to have in your collection, because they dispose of no less than 17 historical opponents and six different allies and thus there are a lot of options for historical battles to be played. In DBA 2.2 this is the composition of the Sassanid army:

The bulk of the army is made up of noble mounted bowmen, in DBA graded as Cavalry and of heavily armed Cataphracts of the nobility again. Foot soldiers are of lesser quality and mainly graded as Horde. There is the possibility to muster one element of Indian war elephants from the eastern border of the Sassanid empire.

I have been working on miniatures from the Sassanid Army Pack from Lurkio. The miniatures’ design is ok as is the quality of their casting. All the mounted miniatures come in two parts: One part is the horse and the horseman’s legs, the other part is the horseman’s torso. This way they say you can vary the appearance of your mounted troops. In fact all torsos (or torsi ?) of the mounted bowmen come in exactly the same pose, so there is not much variety to gain. I would prefer a small number of different poses of one-piece mounted figures from the somewhat laborious procedure of putting the figures together (I have inserted a pin for better stability).

The camp element is a model of the existing tomb of Cyrus II, great king of Persia (about 580 – 530 BC). This model was designed and manufactured by my dear friend Menic, I only had to paint it up. You can order your own raw copy at Menix Miniatures. The priest figure is from Xyston Miniatures’ Parthian King Personality Pack.