The Battle of Marignano (today "Melegnano") was of vital importance for Swiss history and it is counted to be one of the crucial battles of the Italian Wars. On September 13 and 14 of the year 1515 the forces of the french king François I were facing the troops of the Swiss confederation who were defending the duchy of Milan. The Swiss had pledged to protect the Duke M.Sforza of Milan who was also allied with the Pope and with the Emperor Maximilian I. (...)

In the afternoon of September 13 a group of mercenaries, goaded by the swiss Cardinal M.Schiner, rushed towards Marignano. The swiss vanguard, an elite troop of about one thousand arquebusiers, made contact with the French at 17 p.m. but did not succeed to take the french artillery.
At dawn of September 14 the swiss pike squares attacked again, but the french artillery wrought carnage among them. The Swiss had to retreat and started a new attack which was almost successful, but just in time a 12'000 man contingent of the Republic of Venice had arrived to reinforce the french army. In the end, the Swiss retreated towards Milan.

(...)
After the battle of Marignano the Swiss Confederation abandoned its policy of expansion and made "eternal peace" with the French Crown, the treaty consisting of a political and military alliance and of the provision of swiss mercenaries to the french king. This treaty lasted until the outbreak of the french revolution.
(...)
Up to the middle of the 20th century swiss historiography glorified the valour of the swiss combatants at Marignano and tacitly disregarded their problems of command and discipline. Historians passed on the myth of a "lesson learned" in 1515 and of Marignano being the birthplace of swiss neutrality. In reality the reticent policy of the Swiss Cantons after 1515 was a consequence of internal tensions in the wake of Reformation, a series of defeats up to 1525 (Marignano, Bicocca, Sesia, Pavia) and of the amount of losses in manpower caused by the mercenary services.
[translated from the historical encyclopaedia of Switzerland]


I planned to refight the battle of Marignano as a DBA Big Battle game for six players, taking into account of as much of the historical battle as possible while retaining playability and the balance of the two forces. The composition of the two big battle armies is based on historical evidence (France and Venice vs. Swiss Confederation):

The battle was played using the DBA-RRR extension which allows for the development of warfare technology and tactics from the early 16th up to the end of the 17th century.

The DBA gameboard was based on the historical battlefield. It is located between the river Lambro and the road leading from Lodi to the town of Milan and it contains the remains of several dykes which count as marshes according to DBA rules. 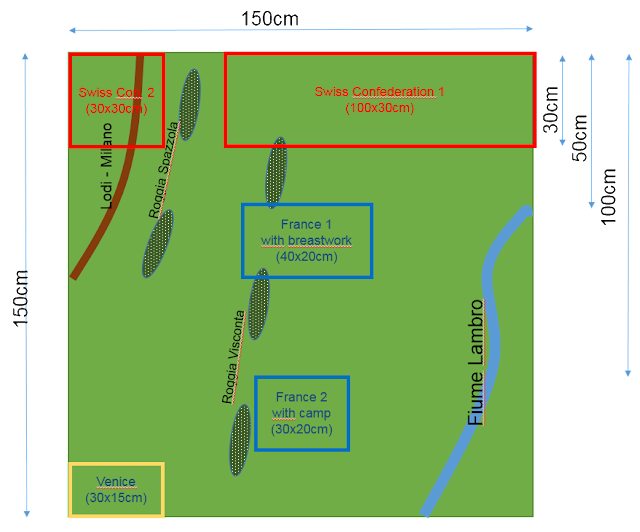 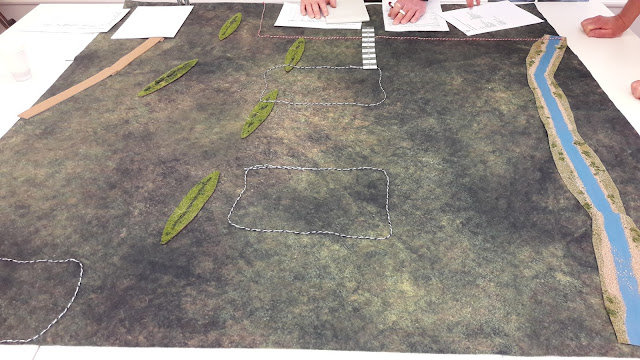 The french players get six elements of entrenchments 40mm wide each, which may be placed in the french deployment zone 1, representing the historical situation of their fortified position. The rules for these entrenchments are closely related to the DBA rules for defending a river bank. The French and Venice troops have to be deployed first, the Swiss are taking the first move.

The game starts with the players discussing their strategy and the composition of their three commands.

The french players surprisingly don't deploy their guns behind entrenchments but opt to place them in the back deployment zone - what will their strategy be?

After a few moves the strategy of the two armies is getting clearer. While the Swiss are straightforwardly attacking the central french stronghold (a sign of a certain lack of subtlety or of boldness?), the french are moving the artillery to their right flank while Venice advances on the left, sending its fast moving arquebusiers ahead:

We have arrived at about mid-game time. The swiss central (High-PIP) command has started to collect casualties, which is dangerous because after loosing five elements this command will become "demoralised". In a DBA Big-Battle game a demoralised command is virtually unable to continue fighting. But worse, if it is the C-in-C's command that gets demoralised, the game is lost for his army!

The stubborn fight of the swiss central command against the french entrenched troops does not pay off. So far the swiss have managed to eliminate a single french pike element while loosing elements in all three commands of their own. Finally another fight (or die roll) in the center of the field goes amiss - which means the swiss C-in-C's command looses its fifth element turning it into the state of demoralisation. Seeing that their big chief Cardinal Schiner has lost his will to fight on, the subordinate commanders and troops call it a day and return to Milan "tae think again".

The french generals' sound strategy has prevailed: They planned to

Which all worked out in perfection. Applause!


For DBA-Big Battle enthusiasts, these were the armies' commands of this game:

There is some background information how I designed the game on this page of my blog, but the text is german only, sorry.